The Most Senior-Friendly City: Motivation, Integration and Support


The "Lebendige Stadt" Foundation has presented its Foundation Award on the theme of "The Most Senior-Friendly City" carrying a cash prize of 15,000 euros at a ceremony in Munich in front of around 500 guests. The winner of this year's competition is the town of Arnsberg in the Sauerland region of northwestern Germany. An expert jury chaired by Düsseldorf-based architect Hermann Henkel chose the Arnsberg concept from a total of 239 submitted entries from Germany and abroad. Special mentions went to Cologne, Sinzheim and Tübingen. The award was open to concepts that make it easier for senior citizens to participate in public life, provide services and support for seniors in their daily lives, and promote cross-generational communication and interaction.


The Foundation Award was presented at the BWM World in Munich by the Chairman of the Board of Trustees of the "Lebendige Stadt" Foundation, Alexander Otto, in the presence of Schleswig-Holstein Minister-President Peter Harry Carstensen.

"The high number of entries shows that we have once again addressed an important social topic this year with the Foundation Award. The winning concepts are above all characterized by their suitability as model projects and are ideal for imitation by other municipalities as best-practice examples", says Alexander Otto, Chairman of the Board of Trustees of the "Lebendige Stadt" Foundation. 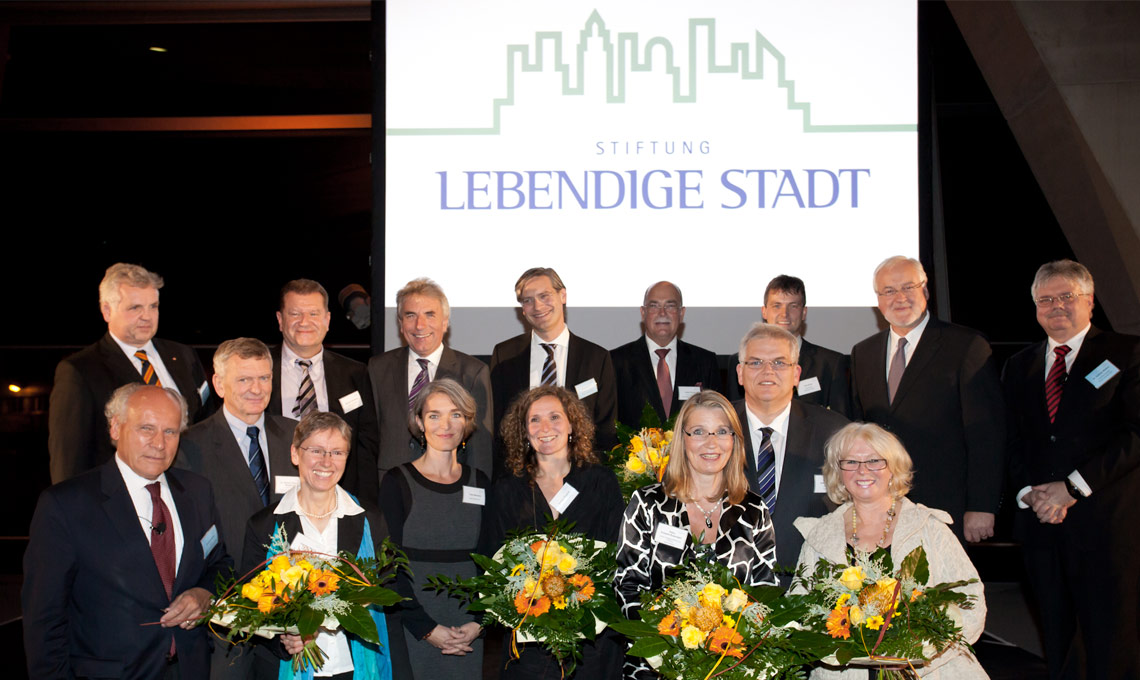 Winner of the 2010 Foundation Award: Arnsberg

The expert jury unanimously chose Arnsberg in North Rhine-Westphalia as the winner of the competition. The jury was impressed by the way the town with just under 80,000 inhabitants actively involves the local people in the implementation of senior-friendly measures. With its holistic concept, the town aims to cater to the requirements of an aging society. The concept is geared towards the needs of the older generation and comprises a wide-ranging care and assistance network alongside a diverse range of integration and mobilization services. The project is underpinned by the close contact and cooperation of all those involved. One of the concrete outcomes of these activities is the Senaka seniors' academy, set up by university lecturers and offering an education program with courses for anyone who's interested. The specialized "Future Age" agency set up by the town acts as a point of contact for senior citizens who want to become involved. Above all, the jury praised the systematic way in which the concept was implemented and developed further.

Three entrants received a special mention. They included the concept "Living with Assistance – Residential Partnerships" in Cologne, initiated by the University of Cologne and funded together with the Cologne Student Services Agency and the Cologne Seniors' Council. The concept has meanwhile also been successfully implemented in similar form in other university cities. Students can find affordable accommodation and offer senior citizens assistance in their daily lives in return. The project brings generations together who can learn and also benefit from each other. The students profit from the experience of the seniors, and the seniors receive new stimuli from the students.

The expert jury also gave a special mention to the "Park of Generations" in the town of Sinzheim in Baden-Württemberg. In exemplary fashion, the concept combines the improvement of the residential environment of a senior citizens' home with elements for different target groups. These include sun terraces onto which beds can be pushed, a dementia garden, school gardens, an animal enclosure and an activity trail. Seniors are activated and integrated by the park, and they are also well supported through the cooperation with schools and kindergartens.

The third special mention was for the senior scheme "Growing Older in Tübingen". The core aim of the concept is to strengthen the infrastructure in the areas where people live. The local population was involved in the decision-making process by organizing town quarter walks with residents, conducting a survey of those from a migrant background, and staging workshops on the topic of long-term care. In addition, the city of Tübingen set up a coordination office for seniors in 2008 in order to create a solid foundation and provide the personnel resources for the planning process and the implementation of the concept. The efforts of the city to involve older people from different sections of society is particularly worthy of praise. The objective is to benefit from the knowledge and experience of seniors, and to actively integrate them in the project.