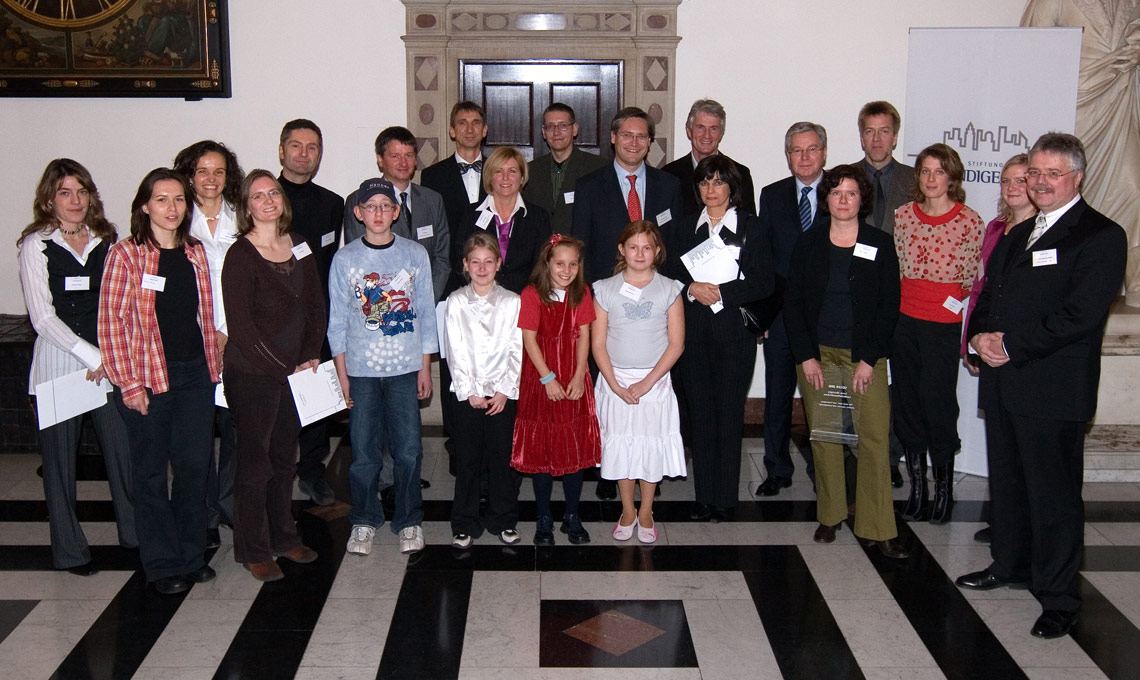 The nonprofit „Lebendige Stadt” Foundation has chosen the Georg-Freundorfer-Platz in Munich as the best playground and leisure area. The award, which carries a total cash prize of 15,000 euros, was presented to the winners of the competition at Bremen City Hall on the evening of Tuesday, December 5, 2006 in the presence of Bremen Mayor Jens Böhrnsen. The expert jury chaired by Düsseldorf-based architect Christoph Ingenhoven selected the winner from a total of 284 entries. Seven other playground and leisure venues received special mentions: Waldschule Tempelsee in Offenbach, the „H2O” project in Hannover, the old airfield in Frankfurt am Main, the „Dreirosenanlage” facility in Basel, a nature playground project in Freiberg, the „Sinnes- und Erlebnisräume” venue in Würzburg and the „Pinke-Panke” children's farm in Berlin.

Special mention was also made of playgrounds and leisure areas characterized by especially creative and innovative layouts and operating concepts. Alexander Otto, Chairman of the Board of Trustees of the „Lebendige Stadt” Foundation: "One central aspect is the affordability from the point of view of the municipalities; it is important that the projects are not only unusual but also that they serve as best practice models for other towns and cities."

The jury also adopted the suggestion of German Family Minister Ursula von der Leyen to ask children and youths what they thought of the projects. Four invited children between the age of 9 and 13 years of age and the accompanying adults took a closer look at the short-listed projects.

The jury voted unanimously to give the 2006 Foundation Award to the Georg-Freundorfer-Platz square in the Westend district of Munich. According to the jury, the square is characterized by a spacious and relaxed layout that makes it the focal point of the entire city district. The project includes generously dimensioned lawn, play and sand areas that replace the former tramline terminus, and the concept drawn up by Berlin-based landscape architects Levin Monsigny is framed by sitting walls. People of all ages enjoy spending time in the pleasant atmosphere of the square. There are benches where visitors can sit down and read or simply relax, summer Bavarian curling lanes and giant chessboards as well as an unusual adventure climbing garden. According to the jury, the Georg-Freundorfer-Platz square has the kind of facility that many towns and cities would like: "An authentic playground and leisure area that is neither over-conspicuous nor restrictive and that gently encourages young and old to play or spend time there."

The Waldschule Tempelsee project in Offenbach received an honorable mention. Following its redevelopment, the former paved schoolyard is now a near-natural playground and exercise area. The motto of the project is "Learning by playing in nature – creating space to grow". During the construction phase, more than 100 helpers (parents, teachers and members of the local congregations) lent a hand. The schoolyard is open to all children and youths in the district. The jury said the voluntary care and supervision concept, in which children also take on responsibility, was particularly worthy of mention.

The "H2O" project in Hanover

The "H2O" project in Hanover also earned a special mention from the jury. The concept is tailored to the specific situation of a "city by the river". It provides model solutions for the redevelopment of "faceless" areas in urban settings. The jury made special mention of the fact that the project provides excellent examples of how images, materials and design ideas can be used to breathe new life into inner city brownfield sites.

The old airfield in Frankfurt/Main

The old airfield in the northerly green belt of Frankfurt am Main/Niddaaue also received a special mention. The jury was particularly impressed by the success with which a former military site had been redeveloped into a location with a high leisure value and a wide range of utilization options for all ages. The preserved section of the runway is ideal for skateboarding, cycling and other play activities. In the view of the jury, the redevelopment concept drawn up by the "GTL Gnüchtel – Triebswetter Landschaftsarchitekten" landscape architects from Kassel shows that it is possible to make use of what had become a wasteland to create a modern space that caters to both leisure needs and nature conservation requirements in the densely populated setting of a major city.

The "Dreirosenanlage" facility in Basel

A further special mention went to Basel. The jury was impressed by the "Dreirosenanlage" playground and leisure area with its convenient access to the banks of the Rhine. The design of the facility exudes both tranquility and a self-assured urbanity. The facility offers a wide range of activities but always adheres to the Basel philosophy of modern design coupled with livability.

The jury also saw the nature playground project on the Saubachweg road in Freiberg as a model project, as the concept fully incorporates the natural surroundings in the overall playscape and refrains from installing prefabricated play facilities. The jury said that the motto "less is more" is underlined not only by the conscious decision to use only very few "imported" play elements but also by a concept that meaningfully and painstakingly enhances the existing potential of "nature in an urban location".

Another honorable mention went to the all-day "Sinnes- und Erlebnisräume" special needs center in Würzburg. The jury praised the innovative concept for the integration of handicapped children – in particular the way it brings together sight-impaired and non sight-impaired children. The playground features elements and structures that appeal to and train the senses of the handicapped children. The jury also described the close cooperation with the Würzburg Institute for the Disabled as exemplary.

The jury made special mention of the "Pinke-Panke" children's farm in Berlin, a project that was also extremely popular with the invited children. The children's farm was set up in May 1991 and is located on a plot that used to be part of the Berlin Wall at the interface of East and West. The basic activities are divided into two areas: looking after and working with animals on the one hand as well as the "hut section" where children can build their own huts using simple materials. There are also regular woodworking and bicycle repair courses for children.

Hella Dunger-Löper Vice-Chairperson of the Jury State Secretary for Construction and Housing, Berlin

Dipl. Ing. Helmut Schneider Director of the Rhineland-Palatinate Construction Forum in the Ministry of Finance and Construction